This past weekend I got the chance to put my travelling boots on (yes, I do actually have boots and I travel in them) again and headed to Tuscany on a school-organized trip to Florence, Pisa, Volterra and Siena. That's a LOT to be packing into three days, and my exhaustion shows it, but I had a complete blast!

For those who might not be super familiar (as was I before this trip), Tuscany is a region north of Rome that is famous for wine, food, and art, among other things. 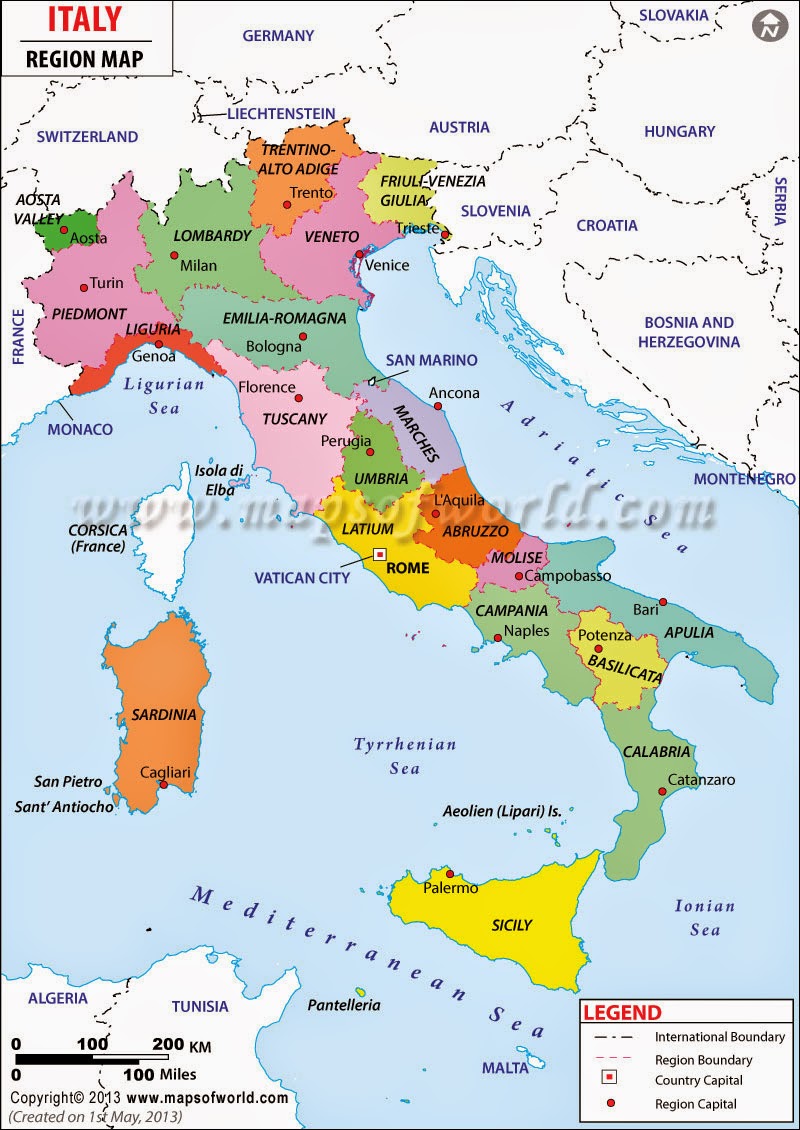 The most well known city is arguably Florence (Firenze, in Italian) that holds claim to Michelangelo, and the most beautiful cathedral I've ever seen. More on that later. Based on what I saw from the bus window (and believe me, we spent *plenty* of time on this bus) the landscape is dominated by rolling hills made positively verdantly green with long grass that literally flows in waves in the wind, sometimes with a few sheep to be spotted roaming them. Other hills are dotted with pale gray-blue olive trees and some with scraggly brown vineyards. Nothing's really in bloom right now since it's still winter, but we've had a few days here recently that herald the slow arrival of spring. I can't wait to go back to Tuscany then.


At any rate, we were up bright and early on Friday to be on the bus at 7 AM. Most of my fellow students spent the three hour drive sleeping, but I was too amped and excited to be on the road again so I spent the time listening to Gipsy King's "Volare" on repeat and staring out the window. It's how I got this shot, of the aforementioned rolling green hills! 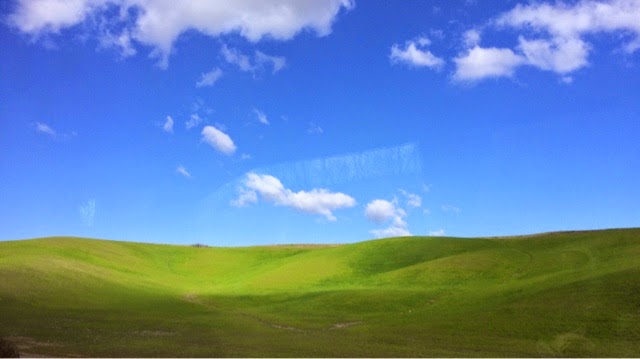 Tuscany doesn't need any editing. (Doesn't this look exactly like the Windows desktop image though?!)

Our first stop on our journey was to a pig farm in the western province near Siena called Azienda Agricola Baruffaldi run by the passion of Daniele Baruffaldi, a former financier in Milan who gave it all up to raise the Cinta Senese pig. So named for the white band running around its black midsection ("cinta" is the Italian for "belt") and the region it is native to (Senese, or Sienese), the Cinta Senese is a unique heritage breed of pig dating back to the 1300's, as made evident by its presence in several paintings from the time period depicting rural Tuscan scenes. 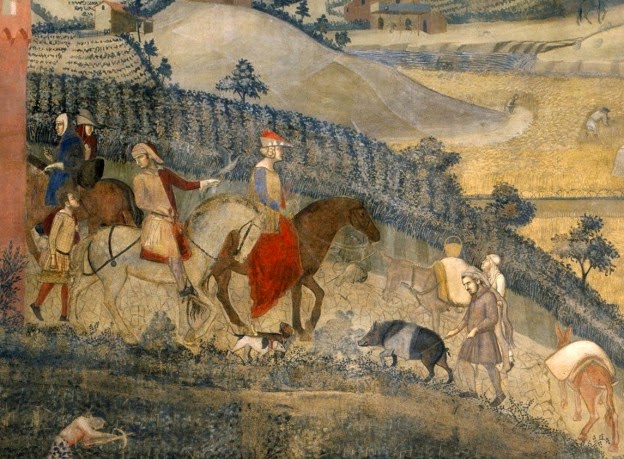 The fresco "The Allegory of Good and Bad Government," painted in 1338 in the Palazzo Pubblico in Siena, Italy.

The breed nearly went extinct due to a slow reproduction rate (sows only bear about 8 piglets a year versus the average 25 of the standard white pig) and lack of profitability for large scale farming (the Cinta Senese take two years to become ready for slaughter as opposed to the 9 months for white pigs; in addition, as a wild pig they also need way more space to live and forage for the wild foods that make their meat so flavourful: the Cinta Senese farmer's association mandates that there can only be 4 pigs per acre of land!) but has slowly been coming back due to the efforts of Daniel and his fellow pig farmers. They have DOP status in Italy (protected designation of origin) and according to Daniel there are only about 1000 of them in all of Italy. Each pig is registered with the Italian government at birth and given a "passport", a unique serial number stamped onto a plastic yellow disk that is inserted in each ear. Every time you buy a certified Cinta Senese product, then, it should come with a label stating all of the "passport" numbers of the pigs that went into that particular piece of salame, and you can go to their website and look up what farms they came from, when they were born, when they were slaughtered, etc. Talk about knowing where your food comes from!

Daniel started with three females and one male, though the ratio can be much higher--according to him, like any good Italian man, one male Cinta Senese can satisfy as many as fifteen women! (Cue giggles from all the students and blushing chortles from our Catholic school staff chaperoning us, especially that of our translator as Daniel speaks only Italian.) He now has about 200 of the animals and practices only natural reproduction in his herd. His love and passion for these pigs is evident in his exuberant explanation of their history and the benefits of their meat, and his respect for their life cycle and their purpose to humans. As a foodie, this is probably one of the biggest steps forward I've taken in my culinary education and I was just eating it up!

Literally. After getting to pet some of the piggies and seeing an exceptionally squeal-y baby, Daniel took us back to his charming little hilltop house to enjoy a generous spread of Cinta Senese products: a few different types of salame, some with fennel seeds; an incredible pancetta which was my favourite; a guanciale which is just so ludicrously rich it should be buying me a Bugatti; and a few other thinner shaved cuts whose names escape me. Rounding out the meal was a simple tomato basil salad made from tomatoes Daniel grows in his own garden and loaves of locally made bread and pecorino cheese, served with olive oil he grows and presses himself. Indeed, Daniel Baruffaldi has me convinced that he is THE Renaissance man of Tuscany.


Excuse the baby talk. It's impossible to avoid when they're so darn cute. (I'm not sure what it says about me that I can still eat them up later with no bad feelings, but nonetheless...) 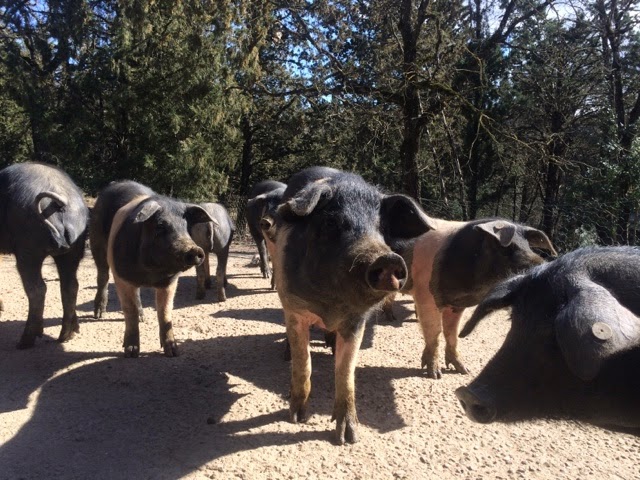 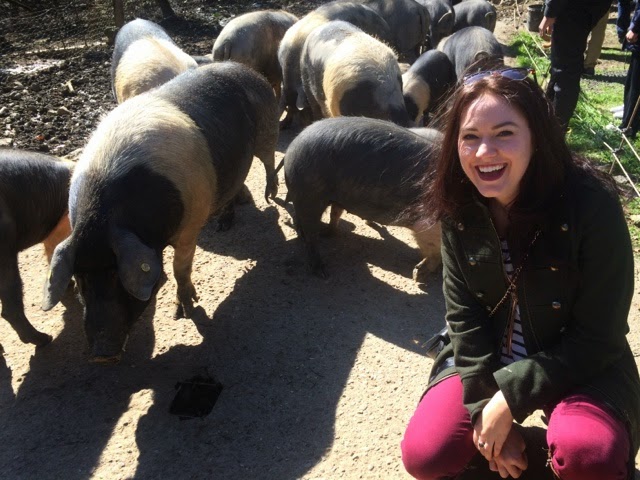 The Cinta Senese meat and fat is high in Omega 3 fatty acids and good cholesterol, making it one of the "healthiest" porcine varieties around. 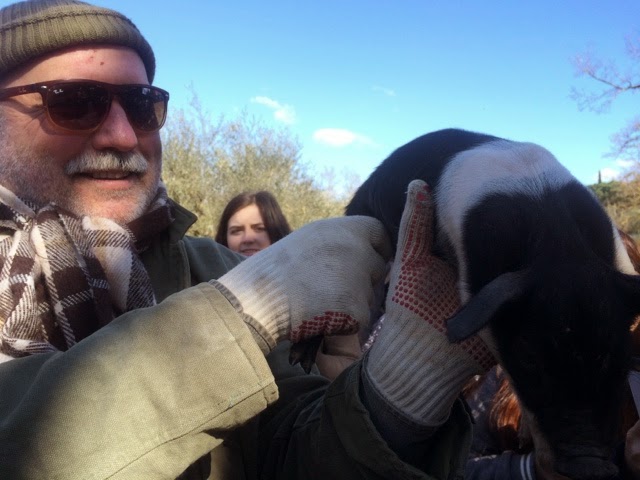 That's the man himself, there! It was freeeezing cold and windy that day, which is why I suspect that little baby was protesting *so* very vociferously at being removed from Mum for a bunch of tourists! 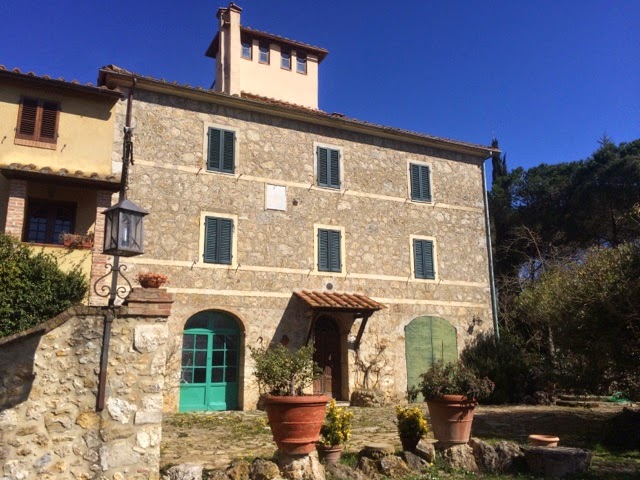 Part of Daniel's beautiful house and garden--absolutely something out of a Tuscan painting. 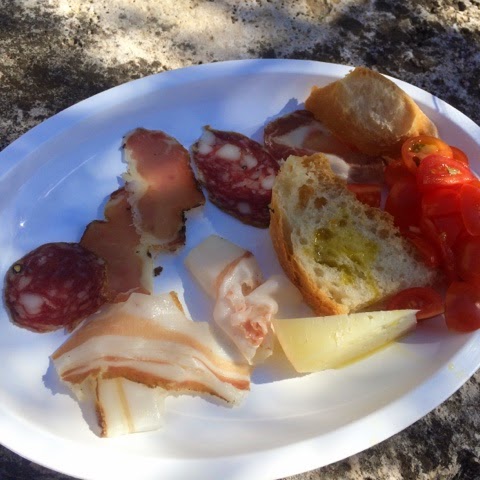 My favourite pancetta, with such an incredibly unique flavour I've never enjoyed anywhere else, is found in that bottom left corner.

According to the website I found for Daniel's farm,  he offers these kinds of tours and experiences regularly for a cost of 30 Euros (15 for the educational tour and 15 for the delectable meal afterwards). I can't possibly endorse this heartily enough if you have even a passing interest in eating delicious food, animals, pigs, Tuscany, food sustainability, eating locally, or just generally having a sweet time. If you can't make it all the way to Tuscany, it looks like some Cinta Senese pigs have made their way to San Francisco in a groundbreaking effort to improve their genetic diversity across the pond.

Coming soon, because somehow "study abroad" apparently actually does involve this "studying" thing: Day One, Part Two, wherein we tear ourselves away from the Tuscan sunshine and head down into the valley to explore Florence.
Posted by SouthAfricanBokkie at 21:34

Hi all! I'm Gracie, a broke-yet-adventurous 24 year old undergraduate student (long story) at the University of Florida in the Warrington College of Business Administration, currently studying abroad in Rome, Italy.