This post is a continuation of the earlier "Tuscany! (Day One, Part One)" posting, and I'm going to keep it brief since I have so much to catch up on.


So! After our delicious lunch at the Cinta Senese farm outside of Siena we finally made it to Florence. After dropping our things off at the hotel (four people to a room with only one hotel key issued, natch) near La Piazza Independencia we immediately split up into two groups to begin our two hour walking tour of Florence. Our guide Lisa was an exuberant local Tuscan who was obviously clearly proud of her heritage and Tuscany in general. (She got in several good-natured digs against Rome during our tour, though the way she said it made me wonder if it was just a Tuscan vs. Rome thing, or more of a Rest-of-Italy vs. Rome thing...)

We were lucky to still have clear blue skies (still freezing weather) and started our tour by walking through the famous Florentine open air markets. Most of the stalls offer similar merchandise and it's largely leather goods (purses, wallets, jackets, and shoes) and silk products interspersed with the traditional touristy tchotchkes, Murano glass products, and one or two ceramics stalls. 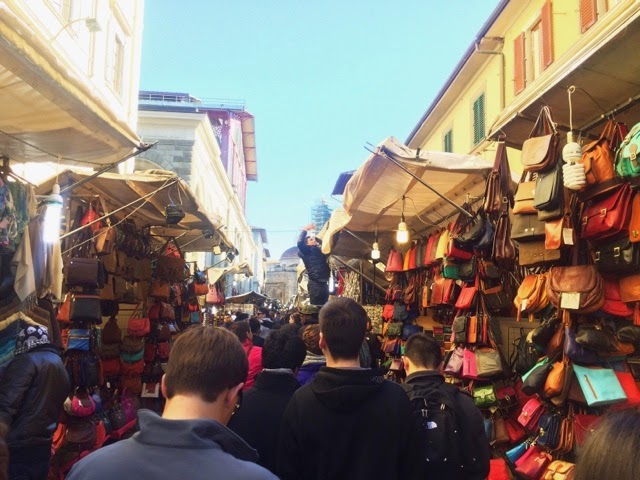 The salesmen here are by far the most aggressive I've encountered anywhere. At some stalls "aggression" comes across simply as sellers standing in the front of their stalls calling out "Hello my friends, come here, look at these lovely purses, good deal for you." At others it manifests as blatant sexual harassment and leering, quickly escalating to sheer rudeness after you politely decline to view their wares. This particular quality culminated in a confrontational shouting match between one particular vendor and I in the middle of the crowded aisle after he sneered "I only liked you from behind anyway" and I told him exactly where he could go and what he could do with himself there. 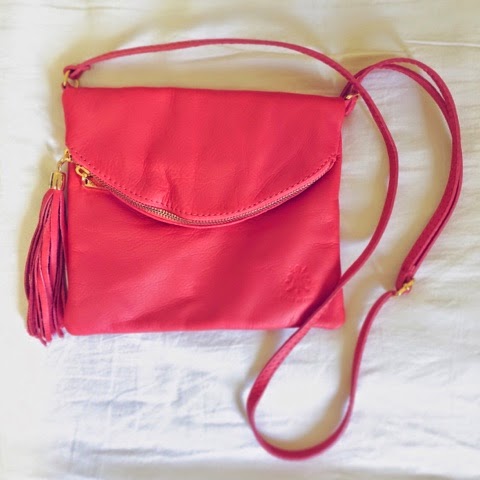 Suffice to say I did not purchase this particular beauty from that guy! 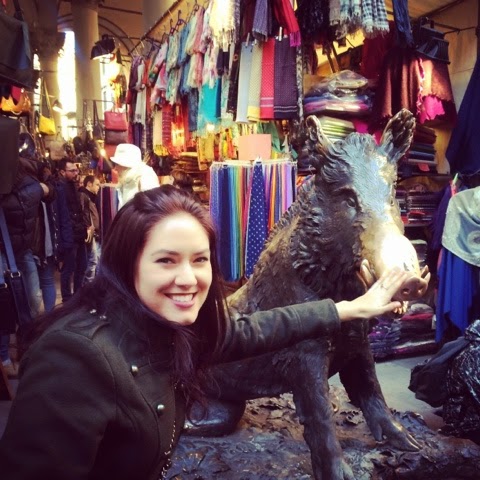 Rubbing the nose of the lucky Florentine boar (their answer to Rome's Trevi Fountain) in order to one day return to Florence!

We made it to what is arguably Florence's biggest (and in my opinion, most beautiful) attraction: the Cattedrale di Santa Maria del Fiore near the city center. The facade is an absolutely stunning neo-Gothic style faced in white, green, and pink marble. The photo below in no way does it justice; coming around the corner of a narrow side street and stumbling onto this scene is utterly jaw dropping. I wasn't the only one to stop dead in my tracks in awe. 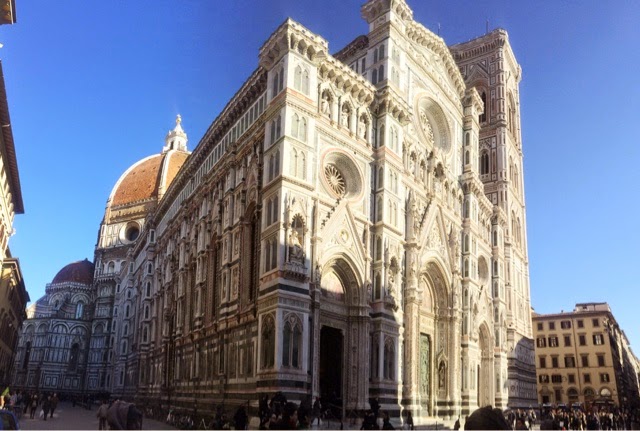 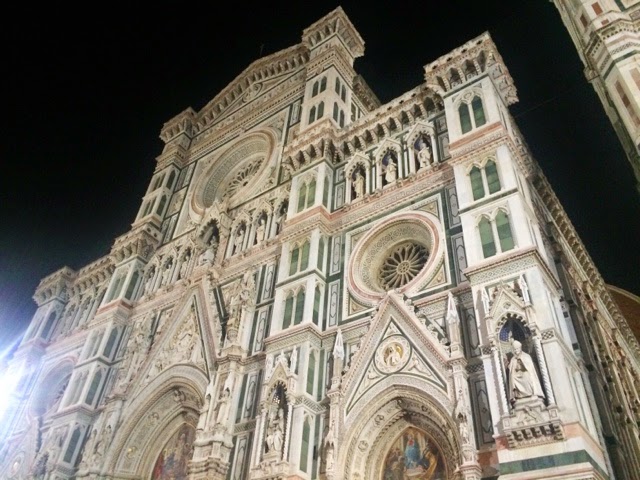 The Cathedral face by night. I love this cathedral so much because the construction style is interesting and ornate without being totally overwhelming (unlike traditional Gothic, which is often comical with its borderline ridiculous over-embellishment) and the simple colour palette appeals to my love of colour blocking. NONE of these photos do it justice! 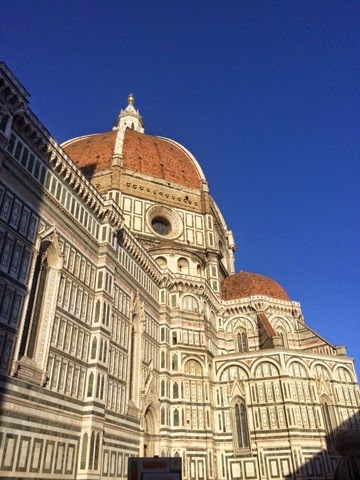 Like most Italian churches the cathedral is organized in the shape of a cross. The entrance is at the base, opening to a long nave and an altar at the far end (underneath that dome, which happens to be the largest brick dome ever constructed in the world). On either side of the altar are small rounded chapels, such that the design of this church is not only that of a cross, but of a daisy as well (the nave being the stem, the altar being the center, and the small chapels the "petals") since Florence is known as the City of the Flowers. 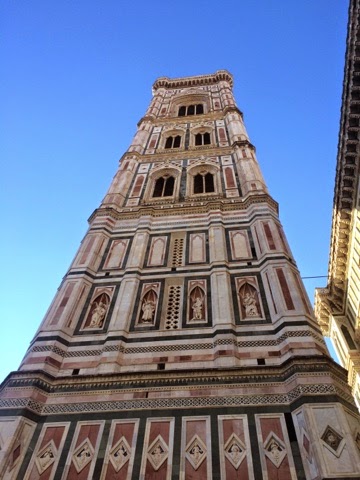 The attached bell tower, which is the feature I adore the most. 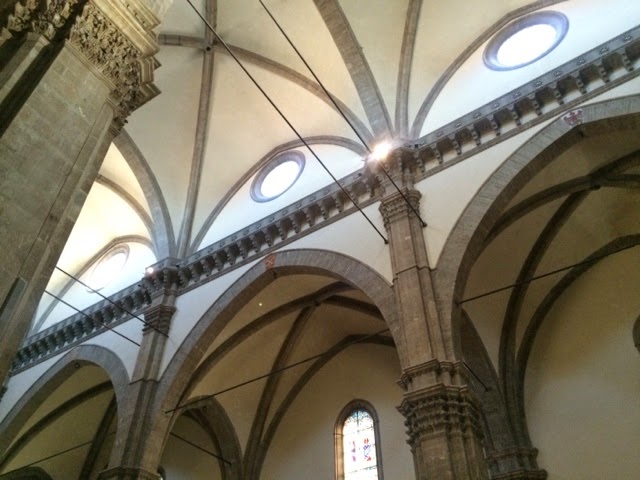 The interior is surprisingly simple, with the intention of encouraging worshippers to focus on the message and communing with God rather than being distracted by decorations. As an easily-distracted-by-shiny-objects Christian, I got it. The back of the church *does* feature a unique clock unlike anything I've ever seen: a "sun clock" from 1443 that's divided up into 24 wedges, with one hand that rotates counter clockwise. The clock ends at the 24th wedge at sunset of each day and is still in working order. Weird and wonderful! 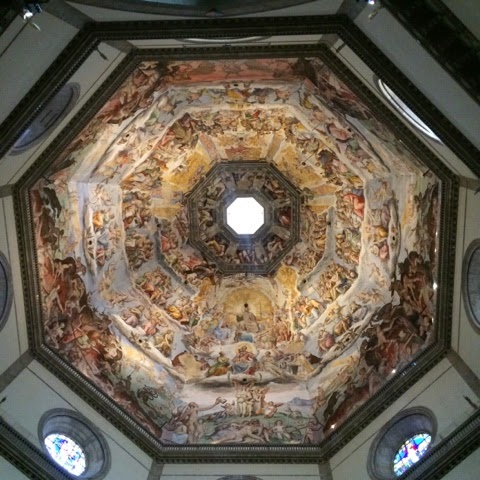 The interior of the dome above the altar is, like many I've seen in Italy, painted with scenes from the Last Judgement. With gruesome depictions of burning hell populated by demons and sinners intended to frighten churchgoers, and God and Father Time standing judge o'er all, there's plenty to see and interpret. Until your neck gets sore.


From there it was off to the shopping district and Ponte Vecchio (Old Bridge) to see the view of the river. 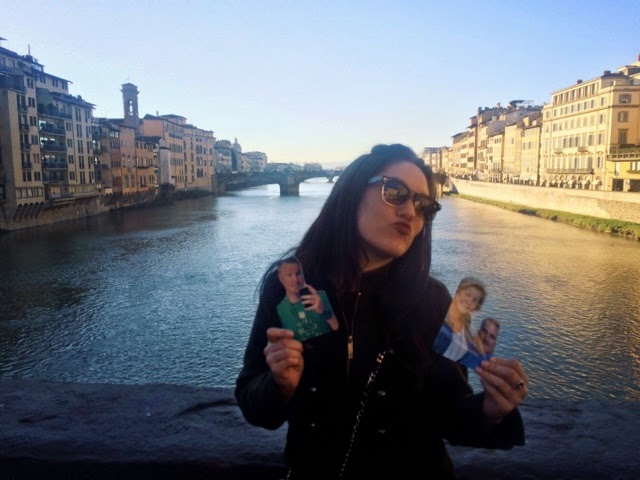 Cheesin' with my GoFundMe sponsors for this particular trip: Drew Manchester and Robin and Byron Moore! Love you guys! 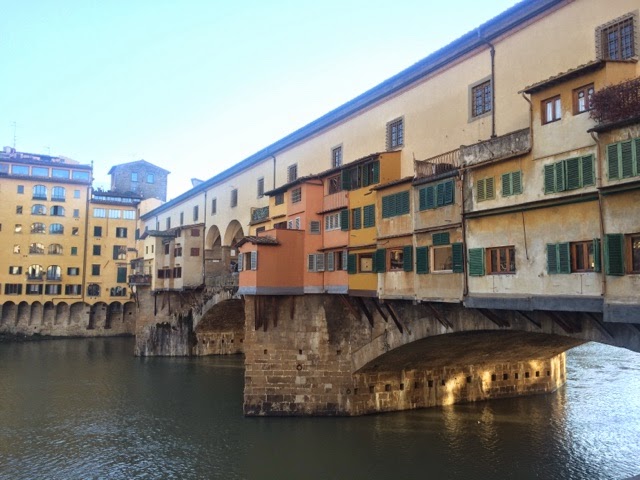 We capped off the night after dinner trying out some Tuscan wine in a very chill, rustic wine bar. After a 15 hour day of running around like maniacs it was wonderful to have a chance to sit down and unwind with my one true love. :) 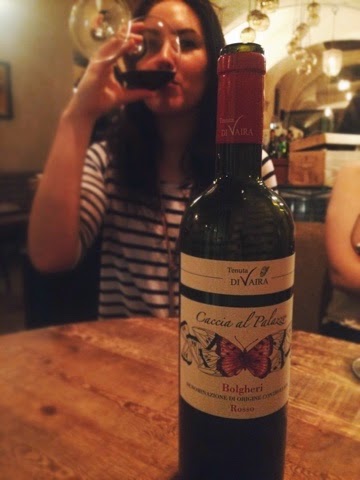 Tuscany: Day Two Part Two coming...as soon as I get the motivation.
Posted by SouthAfricanBokkie at 15:22

Hi all! I'm Gracie, a broke-yet-adventurous 24 year old undergraduate student (long story) at the University of Florida in the Warrington College of Business Administration, currently studying abroad in Rome, Italy.